The first road through Marsden to be turnpiked was Meltham Road in c1760.

Travelling from Huddersfield to Marsden, along this turnpike the first inn in Marsden was The Travellers' Rest, built around 1770 on that part of the road which is called Chain. 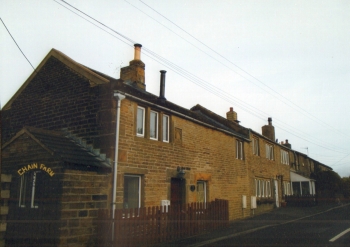 This beerhouse occupied the cottage with an elaborate porch at the top of a small terrace with a barn above and a later cottage built to link The Travellers' Rest with the barn. It lies below the height of the present road which may indicate that it actually existed before the 1771turnpike road was in use. In his will dated 1848 Joseph Holroyd left one old barrel, 2 old brewing tubs and a house and barn to his daughter, Mary Goodall. She was the wife of Francis Goodall who was the brother of Richard Goodall, owner of the British Queen.

Josiah Moorhouse, the landlord in the 1861 census, described himself as a beerhouse keeper and grocer. Licensees commonly had two occupations for example combining the selling of beer with farming, butchering or labouring, whilst their wives would serve passing travellers with refreshment during the day.

The Travellers' Rest closed in 1915 having had a renewal of its licence refused due to it being "ill adapted for the trade" The owner of the property declined to "reconstruct or remodel" the property to bring it up to the standard required and was awarded £1170.2.11d. compensation.