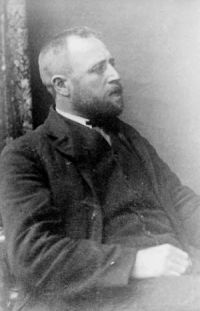 George Marsden was born at Lane Head, Binn on 18th October 1848, the eighth child of William Marsden, a woollen beamer and putter up, and Hannah, who worked as a burler after her husband’s death. The family later moved to High Gate. By the age of 22 George was living in Town, working as a quarryman; by 1881 he was a yeast merchant at Green; in 1891 he was also a rug manufacturer, living in Town Gate, and by 1901 he had become a general dealer at Bridge End. He was also a postman for some years, and acted as "public pinder" under the Marsden Court-Leat.

According to his obituary, he was "continually carrying out novel experiments, and he had a strong penchant for inventions – none of which, however, achieved fame or fortune. His most successful was a bone crusher for making poultry foods, while another invention of his was a rug-making machine". He also invented a turnip-pulper, and advertised that a prototype could be viewed at Marsden station.

George was a self-educated man, with interests in local history, antiquities, and archaeology. He owned a collection of prehistoric relics, mostly found on the moors around Marsden: his most important discovery was of an early Bronze Age site on Pule Hill in 1896. Unfortunately "Mrs Marsden taking hold of it [one of the urns he found] in the ordinary method, it came to pieces". The four Bronze Age burial urns he found are now on display in the Tolson Museum.

He was known in Marsden by the nickname "Th’ Owd Relic", and he published a number of poems in the local newspaper under this name, and also contributed articles on local history. He was interested in dialect poetry and local poetry, and corresponded with the poet Ammon Wrigley of Saddleworth.