The British Queen and the New Inn

In the centre of the village there were two substantial hostelries, The British Queen and The New Inn both built in 1839 on either comer of Peel Street with Manchester Road.

The 1841 census shows both Richard Goodall and Cyrus Fell to be resident licensees at The British Queen. Richard Goodall had been the landlord of the George and Dragon in Goodalls Yard in Brougham Road. Humphrey Davenport had a career change from landlord of the adjacent New Inn to take over the running of the Post Office which was based at The British Queen. This arrangement was short lived.

By1891 the Post Office had moved to Johnstone's emporium in Peel Street, now occupied by The Riverhead. The British Queen was delicensed in 1855 and renamed Ingfield House. By 1911 the building had become home to the two village doctors with their surgery being held in the attached cottage. 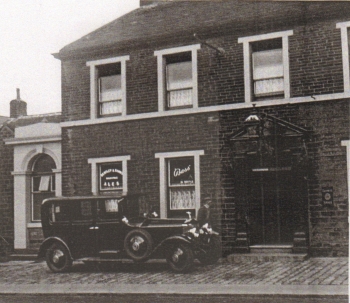 The New Inn on the adjacent comer of Peel Street and Manchester Road had quite a different story both in its success as a business and in its longevity as a public house.

Humphrey Davenport was the first innkeeper. From its beginnings it was a flourishing coaching inn employing ostlers and live-in female servants. The doorway to the left of the front entrance to the inn opened onto a staircase which led up to the first floor public hall used for dances, meetings and all manner of other gatherings. The Court Leet, the Manorial Court, was held at the New Inn in the early 1900s. An invoice dated 24.4.1916 for the refreshments consumed by the 14 attendees showed that they had lunch and dinner accompanied by 18 bottles of beer, 1 bottle of 1887 port, 1 bottle of sherry and 50 cigars which no doubt helped the proceedings to move smoothly.