By 1779 it became obvious that the gradient of Old Mount Road was impractical for much of the wheeled traffic passing through Marsden on the way to Saddleworth and beyond. It was resolved to create a new road which would adequately meet the needs of passengers travelling in coaches and carriages. Meltham Road was extended to form a new route along what we now call Carrs Road, over Ottiwells Bridge and up Mount Road.

This improved version of the Wakefield to Austerlands Turnpike was built between 1779 and 1781 and provided the impetus for the building of large coaching inns along its route. 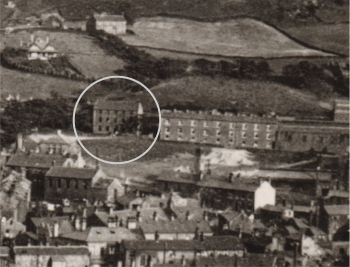 The Blue Lion built in or around 1780 was one such inn. It was certainly an inn at the time of the Luddite riots in 1812 and is believed to have quartered infantry who were stationed in Marsden to protect mill property. Many Marsdeners were antagonistic towards these soldiers who, they felt, "contaminated the whole neighbourhood" and, following their withdrawal, there was a move to boycott the hostelries which had accommodated them. Not only did innkeepers face loss of trade due to the animosity of their customers but remuneration allowed by the Government was inadequate so that innkeepers were impoverished and, in some cases ruined. One or both of the above resulted in The Blue Lion closing in 1813.

The building was re-named Ready Carr House and became the home and workplace of Enoch Taylor, and his brother, James, when they relocated their metal working business from Goodall's Yard in Brougham Road to found the Marsden Iron Foundry famous for being the manufacturers of the cropping frames which the Luddites protested so violently against.

Following the demise of the iron foundry in 1905 John Edward Crowther bought the property at auction and absorbed the, by then, extensive factory buildings into his textile business. Crowther sold Ready Carr House to the Adult School Trust in 1914. The Adult School building was taken over by the military in 1947 to house Polish ex-servicemen. They lived in this 'comfortable hostel' and worked in Crowther's mill leaving just one room for the Adult School. Ready Carr House was demolished in 1971 having had a dangerous building order placed on it.